This is the Revolution! It just recently occurred to me that – this is what we envisioned back in the 1960’s when we railed against the Establishment and the Viet Nam war. We were angry, disenfranchised and very vocal about our disenchantment with the American military industrial machine that cared more about money, power and oil than the welfare of the people.
Power to the People was one of the slogans chanted during our protests but during the fifty years that have passed since then, the people have less power now than ever before. The Establishment on the other hand expanded exponentially and now personifies the oligarchy that has replaced our democracy and destroyed the middle class that made America great.
But now – the revolution has presented itself in a way that I never anticipated. And it is by far a much better type of revolution than we ever imagined during our 60’s protests that held visions of Black Panthers and Hippies. Even Gil Scott-Heron’s “The Revolution Will Not Be Televised” did not foresee the revolution that we are currently entering into. Who could have possibly predicted that the revolution would start with the rantings of one of the Establishments greatest icons – Donald Trump!
It’s not just Donald Trump of course because there have been many other voices calling for change as well. Elizabeth Warren has waged war on the big banks and Bernie Sanders has garnered huge support from the other major party by proposing wholesale changes to our society by breaking up the status quo that favors the rich at the expense of the poor.
Anyway you skin it, these highly visible, non-mainstream politicians have struck a chord with an angry proletariat that is painfully aware of societal inequities and have finally found voices that speak to their anger and frustration. This surge of support for both Trump and Sanders feels an awful lot like a revolution to me and I think we may be on the verge of something that actually has a chance to reach critical mass.
At the very minimum, the conversation that has been taking place in the small circles of Tea Parties, talk shows and campuses has now sprung onto the mainstream media, largely due to the surprising success both Trump and Sanders. This is incredibly healthy and kind of along the lines of the old adage – ‘every solution begins with recognition of the problem’. I’m not sure how this will all end up but I, for one, am digging out my old tie-dyed tee shirts and getting ready to support The Revolution!

In reading the news this morning, the paper said that a number of roofs had collapsed under the weight of the snow left by the horrendous storm that dropped a year’s worth of snow in a single day. Other articles spoke to the need for roofers to shovel the snow off of the roofs before more collapses occurred.

While there is no doubt that these collapses occurred, the “techie” in me always wants to know the details. Were these roofs that collapsed residential or commercial? Were they old structures or newer construction? Having spent years analyzing roof structures to determine the viability of installing tile roofs, my mind always wants to know the details. All too often reports like these create perceptions and fears that are based on situational hysteria and generalities. Ebola in America anyone?

There is no doubt that six feet of snow puts a lot of additional stress on a roof (fresh snow weighs approximately 4.5 pounds per cubic foot but can increase to as much as 25 pounds as it “ripens”) but, believe it or not, current building codes are required to anticipate events like this and a properly constructed roof structure should be able to handle even these seemingly outrageous amounts of snow. The problems arise when the structures were not built according to these codes or were built before the code adequately addressed such conditions. The Uniform Building Codes were not around in the early parts of the twentieth century and I suspects that a sizeable percentage of the buildings in the Buffalo area may have predated comprehensive codes and inspection.

Beyond my curiosity about the particulars of the Buffalo failures lies my belief that roofers in this country should be just as knowledgeable about the capabilities of the roof structure as they should be about the best way to cover it up and keep the water out. In an informal survey that I conducted earlier this year on that subject, it was clear that there were a lot of opinions regarding roof strength but a woeful dearth of knowledge regarding the criteria used to determine roof strength.

There seems to be a general understanding that roof strength is in the realm of engineers but few, if any seemed to realize that the engineering and construction criteria has already been figured out and published and it only takes a little research to learn how to determine the capacity of any roof system. It’s amazing to me that so many roofers still rely on the “bounce” test to determine the strength of the roof. Jumping up and down in the center of the roof may give you a quick indication of strength but it is a far cry from performing the type of analysis that I would expect from a contractor that I am considering to do my reroof.

Knowledge of Section 2308/Conventional Lightweight Construction of the International Building Code and familiarity with published span charts should be a standard requirement for anyone qualifying for a roofing license since the longevity of the roofing system very often relies on the integrity if the roof it is attached to. The fact is that it is not that difficult or expensive to reinforce a roof system and this should be something that roofers would be well advised to add to their repertoire.

As an active advocate for Green Building, it infuriates me every time I read an article about a LEED certified home that has all the proper components incorporated into the design and then gets topped off with an asphalt shingle roof. By any measure, the last roofing material that should be considered for a LEED certified home, or any other Green design, is asphalt shingles.
It seems that nearly everyone with environmental awareness recognizes the need to move away from the products of fossil fuels but I am totally perplexed by the blind eye that allows asphalt shingles to continue to exist. The scientific community sees asphalt shingles as the base material for system comparisons since no other roofing material performs as poorly when it comes to energy efficiency, sustainability or resistance to severe weather. Worn out asphalt shingles contribute over eleven tons of nasty debris to our US landfills every year and efforts to recycle this material have been woefully inadequate and inefficient.
In recent years, roofers have seen the cost of asphalt shingles climb 6 to 10 percent per year with no end in sight due to, according to the shingle manufacturers, a reduced supply of the asphalt grade needed to produce shingles (Letter from Bob Tafaro on GAF Oil Asphalt Costs 11.08) It got to the point here in Southern California that asphalt shingles cost more than standard concrete roofing tiles that represent a far superior value in terms of cost, durability and overall sustainability.
And yet, most consumers in America are led to believe that shingles are their only affordable option – particularly in those regions east of the Mississippi River. Over the years I have had countless visitors from other countries who are amazed that the richest country on Earth, routinely uses the most useless roofing material on the majority of our homes. I think that it’s time for a change and I believe that change has to happen from within the roofing community. It should be the responsibility of the roofers to find the best value for their customers and stop doing what they’ve always done just because it is easy for themselves.

My name is Jerry and I’m a roofer. Except that I haven’t made a living as an actual roofer for over thirty years. I have however spent the entire last forty years in the roofing industry and although I’ve done a lot more than pound nails for the past thirty years, at heart, I’m still a roofer.

That being said, I’m also a concerned citizen of this fine country and I share in the trials and tribulations of a lot of other Americans who are angry and confused about why it’s so darned hard to get by in this day and age. I’ve got some pretty strong ideas about a lot a different things other than roofing but since I am a roofer, it’s likely that most of my musing will somehow relate to that topic.

The other distinction that you should be aware of right up front is that I am an unabashed advocate for tile roofing. I like things that last and I think that properly installed tile roofs are infinitely superior to the asphalt shingles that contribute over 11 million tons of trash to ours landfills every year in this country.

There are a number of reasons that tile roofs are not currently used extensively in all regions of this country and my goal will be to bust the myths that affect many peoples perspective that tiles aren’t appropriate for their regions. I intend to offer actual facts and will welcome open discussion with anyone interested in intelligent discourse on any of the topics I present.

I’m glad to finally be here and look forward to meeting some of the interesting people who I know are out there. To you – welcome & Cheers!

Amen! I have a grey dust inside my house and black dust outside from asphalt shingles . It has made me very sick and I cannot believe this product continues to be on the market. It is ecologically a disaster in the making. How the government continues to allow its use is beyond me !!!! 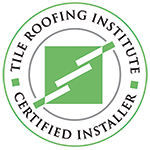 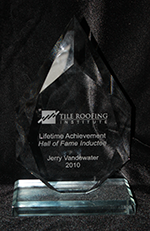